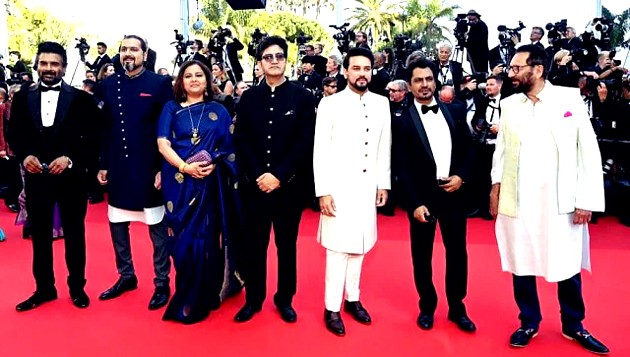 Deepika Padukone opted for a Sabyasachi sari as the Bollywood star on Tuesday walked the red carpet of the 2022 Cannes Film Festival.

The actor, who serves as a jury member for 75th edition of the film gala, turned up at the Cannes red carpet in a black and golden sari with matching jewellery from the ace designer’s Aakash Tara collection.

The outfit featured stripes which were block printed and hand embroidered by some of India’s finest craftspeople, read a note posted on Sabyasachi’s official Instagram handle.

Padukone matched the sari with a headband and chandelier earrings to complete the look.

The sari was Padukone’s second Sabyasachi outfit at the Cannes after the actor attended a photocall with the rest of the jury members earlier in the day. For the photocall, the 36-year-old actor wore a beige and green outfit and jewellery from Sabyasachi’s resort series collection “Tropic of Calcutta”.

She paired the dress with the Lucknow Rose, a deconstructed Maharani necklace that was crafted with extensively sourced multicoloured gemstones and uncut diamonds.

Delhi-based filmmaker Shaunak Sen’s documentary All That Breathes and Pratham Khurana’s short film in Le Cinef (a competition for film schools) are India’s only cinematic representations at the main festival.

India is also the official country of honour at the Marche du Cannes (Cannes Film Market). Besides, the festival will showcase a restored version of Satyajit Ray’s Pratidwandi.

Information and Broadcasting Minister Anurag Thakur led the Indian contingent at the Festival, where India has been named as the ‘country of honour’ for ‘Marche du Film’, the business counterpart of the marquee event.

Thakur was received by India’s Ambassador to France Jawed Ashraf on Tuesday.

“This will be the biggest Indian contingent to walk on the Cannes red carpet ever,” an I&B Ministry official earlier said.

On Wednesday, Thakur will inaugurate the India Pavilion at the business event alongside the Cannes Film Festival and participate in the opening night festivities of Marche Du Film at the Majestic Beach.

As one of the highlights of India’s status as the ‘country of honour’, a special screening of a restored Indian classic Pratidwandi, directed by Satyajit Ray, has been planned as part of the festival’s Cannes Classics selection.

In addition, world premieres of a selection of Indian films will be held at the Olympia Cinema.

These movies are part of the ‘Work In Progress’ lab under the Film Bazaar.

R Madhavan’s film, Rocketry: The Nambi Effect, will have its world premiere at the festival on 19 May.