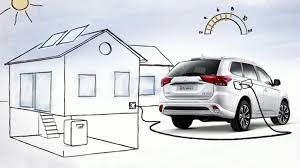 An electric car can power your house (V2H)


The vehicle-to-home (V2H) smart charging is a way where one can store electricity in their electric car and then use it as a power source in the time of need. The idea of using cars as the storage for batteries sounds great right! The hassle of keeping a battery and an inverter for electricity backup in the house would no more be something to worry about, instead, all can have an electric car which can also be used as a backup source of energy if needed adding more to that it can be seen as a moving source of electricity backup.


But the main question comes here how does it work? Will there be any effect on the battery of the car, and will it not be a violation of battery warranty conditions? Is it commercially beneficial? We are going to discuss all these points further.


How does vehicle-to-home (V2H) work?


CHAdeMO vs CCS: Currently only Japanese electric vehicles support V2H thus only CHAdeMO fast-charging connectors can provide V2H facilities. However, this can expand V2H capabilities to CCS fast charging ports, too by the latest car to the grid communication interface standard.


DC vs AC V2H chargers: There is a very small number of V2H chargers that support AC charging. The reason is quite simple as the implementation of V2H is easier with direct current (DC) chargers as compared to alternating current (AC) chargers. However, electric cars need to have some kind of invertor as the DC stored in the batteries needs to be converted to AC power to be used at homes.


Will there be any effect on the battery of the car, and will it not be a violation of battery warranty conditions?


Since its conception, battery deterioration, and therefore the economic feasibility of V2H bidirectional operations, has been a point of debate in the electric vehicle market. The pace of EV battery deterioration is determined by how they are being put into use. The deterioration of a battery is determined by several parameters, including how frequently and how much one discharge the battery (discharging current), at what temperature, – to what capacity throughput, at what state of charge (SoC) of the battery, and the depth of discharge (DoD).


As a result of battery life degradation, one of the major problems impeding V2H or other bidirectional solutions is the automobile manufacturer’s battery guarantee.


For eight years, the industry-wide guarantee for EV manufacturers is about 160,000 km of driving with a minimum remaining capacity of 70%. However, Nissan is the only electric vehicle manufacturing company that has said that using V2H would not violate the warranty of its car battery. As the electric vehicles manufacturers are better able to understand the capabilities and safety of their batteries, they have the chance to build a better battery management system for their electric vehicles, by this, they can guarantee a warranty for a longer period, including V2H operations.


Is it commercially beneficial?


There are a lot of cases where the use of V2H has been found beneficial but there are some places where it makes no difference or sometimes is even costlier when comes to the overall cost. As of now, nothing can be said whether it is really beneficial or not. Shortly when all the electric cars will support V2H charging then it might become beneficial for everyone.


Electric cars can be used as an emergency power supply for homes:


There is no place in the world where power cannot go out, even the most developed countries have power outages at least once a year. Under these circumstances, the electric vehicles that support V2H can act as an emergency power backup for the house. Although it depends on the battery of the car that for how long can it power the appliances in the home.


At the same time a large number of appliances can be used:


Sometimes there might not be enough power in the grid to power up large appliances or too many appliances at a time. The electric car solves this issue as it gives out a constant current all the time. So, if the car comes with V2H compatibility it can power up bigger appliances and even be able to power a large sum of appliances all at once.


Effective use of natural energy and self-sustainable living:


Vehicle- to home provides a perfect combination of two technologies an electric motor which benefits the environment and makes our traveling lot smoother compared to gas cars. By storing the power generated by solar power, wind power, and by collecting the energy from regenerative breaking it can charge up a battery and act as a storage for electric power and we can re-use the stored energy from the battery for home uses. This helps in saving some grid charges along with leading us to an eco-friendly lifestyle.


Electric vehicles are already getting popular in the market and are replacing normal gas cars with the V2H smart charging facility coming to all the electric cars the need for home battery storage will reduce over time. It will change how we consume electricity.