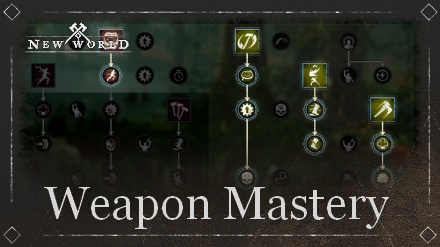 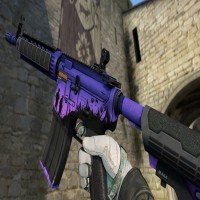 Weapon mastery is an essential part of New World's grindy gameplay. Here's what players need to know about it.

The best weapon in any game is useless if a character can't equip it or doesn't have the skills to use it. Everyone knows an MMORPG that requires a player to run around killing random beasts or monsters to "grind up their level" when they pick up a new type of weapon. New World also includes this mechanic to some extent when it comes to mastering a character's weapons of choice but the other guidelines when it comes to fundamentals like classes, professions, and weapon proficiency are lacking, so it's easy for players to get confused or overwhelmed when presented with all of the options.

Weapons in New World is one of the most customizable parts of the game, and one that players collectively agree is one of the MMO's greatest strengths. The Weapon Mastery screen can be found under the Character tab, which gamers can easily reach using the "K" key as a shortcut.

There are only a few types of weapons available in New World, but so many variations on these choices that players won't miss features like dual-wielding or items like crossbows. Since any player can pick up any weapon, that gives each individual even more options.

The introduction every new player has to Aeternum is a sandy beach, ragged with shipwrecks and teeming with undead. There's a good chance that the weapon most players pick up first won't be the choice they run with for the rest of the game, and it doesn't have to be.

Even before players reach the first settlement, they can either make a camp or visit the one set up on the beach for new arrivals which can be used to craft some basic armor and tools. The only materials required for these early recipes are greenwood and flint, which can be harvested using only bare hands, so there's no reason not to get started.

There are a number of tools in New World that are used for trade skills like harvesting and gathering. These can't be used as weapons and the character's proficiency with them isn't related to Weapon Mastery.

The hatchet, for example, is a one-handed weapon that has nothing to do with a player's logging ax or their logging skill level. It would be nice to be able to use a sickle as a weapon but it's strictly for harvesting vegetables, fruits, and useful plants.

The Mastery Skills for weapons and tools are separate in New World, but the crafting skills used to make them are the same. This is one of the reasons making tools and weapons as soon as possible is highly recommended.

Players level their Engineering skills when crafting items like skinning knives, sickles, and logging axes. That's convenient because the same skill is used to make spears and muskets. The most basic wooden sword can be crafted at a Tier I level campfire, and it's the ideal way to start leveling the Weaponsmithing skill.

3.No Classes Means No Restrictions

Unlike some RPGs, which limit their players strictly to the weapons assigned to their classes, New World has no classes and therefore no restrictions on the weapons each character can use. The catch is that players would have to "respec" if they wanted to make a dramatic change late in the Weapon Mastery leveling process, and this requires spending Azoth.

Azoth is the substance used and collected in Aeternum that's obtained from harvesting, crafting, enemy drops, and as a reward for completing quests. It's used as a type of currency when fast-traveling, to upgrade items when crafting, and when re-speccing talent points for weapons. Players that anticipate changing their minds a lot would be wise to stockpile some of this valuable resource.

Characters shun the restrictions of classes in New World. Instead, they rely on their party role regarding their specific weapon mastery build. Is this a character that heals, defends, controls the crowd, draws aggro, or does a whole lot of damage?

There's more pressure on the player to build their character and conduct their group and solo play in order to define their character's class. A big part of being a good healer, striker, or defender is Weapon Mastery, which in turn is related to a character's ability scores.

A clever way that New World simplifies Weapon Mastery is by assigning each weapon a primary and sometimes secondary ability score. For example, players working towards weapon mastery with a rapier are considered to be a DPS class and will build up Dexterity as their primary ability score and Intelligence as their secondary one. These points can be found under the Attributes tab, and it costs gold to respec these points as opposed to Azoth.