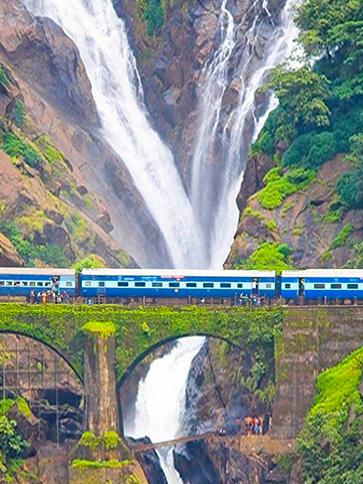 Would You know what to do if your caravan broke down on the motorway? Something so alike, so thrilling happened with me last week. This journey of mines started at around 10 pm from Chatrapati Shivaji Terminus, Mumbai. I was so excited to visit our India’s tallest waterfalls ‘The Dudh Sagar Falls’ which is located on Mandovi river in Goa. Below Solo Trek to Dudhsagar waterfall – Goa

Now, my beautiful journey was started. I reached Madgaon station, Goa at 8:30 in the morning. Now I was in the beautiful city of beaches, Goa. I had my breakfast at the station and relaxed for a while. Now I had to hire a scooter as my destination was 50kms away from me and there was no other source of reaching my destination as the train was available only for limited time. So I hired a scooter and started my journey. On my way, I had to cross dense forests. The forests were so dense that couldn’t even see the sky properly. Moreover, I was all alone. Somehow, I managed to cross the dense forest. At around 11 am, I reached a base village Kullem station via scooter.

Meeting with another Group:-

There I met a group of people, they too were going to the destination where I was heading to. That group of people was from Pune, they asked me to join their group. I too felt traveling with a group would also be fun so I joined them in the journey. My Solo Trek to Dudhsagar waterfall – Goa

Difficulties in our way:-

Then, we reached a location where there was a big river, unfortunately, we had to cross that huge river to reach out our destination. Crossing that river seemed so terrific but on the other hand, we all were so excited to experience such a thing and also, as it is well said, “God helps those who help themselves”.