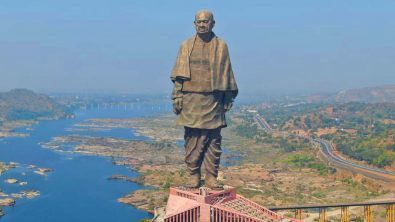 
The one who won millions of hearts and over British leaders in the Satyagrah of Kheda and Bardoli, Sardar Vallabhbhai Patel was the Bismarck of Modern India. He is known as the architect of India, as he united all diverse 562 princely states to build one great Republic of India.


Vallabhbhai Patel (1875 –1950) was a political and social leader of India who played a major role in the country’s struggle for independence. He was called the “Iron Man of India”, and was often addressed as “Sardar” which means “Leader” in many languages.


Sardae patel rose to the leadership of the Indian National Congress and was at the forefront of rebellions and political events, and promoting the Quit India movement.He was the first Home Minister and Deputy Prime Minister of India and organised relief for refugees in Punjab and Delhi, and worked hard to restore peace across the nation. Now the World’s Tallest Statue is in India.

This 182 metres tall statue is situated in Gujarat on Sardar sarovar Dam and is recently completed in October, 2018. The statue of Unity is built to commemorate Sardar Vallabhai Patel. Sardar Vallabhai Patel, one of the most prominent leaders of India, who played an extreme role in uniting many princely states. This statue is built for his tribute. He was the first Deputy Prime Minister of India.


The funding of this huge statue is done by public private partnership model but most of the money was raised by Government of Gujarat. It took 56 months to complete the project.The total cost of the project was estimated to be about ₹20.63 billion. Mr. Narendra Modi, as a chief minister of Gujarat and also the prime minister of India laid the foundation on October 31st.


Uniqueness about the statue


This statue holds the tag for being the fastest developed statue as it was built within 56 months to complete. This monument has twice the height of the Statue of Liberty in US.


Behind this huge success


Behind this incredible success worked 250 engineers and over 3,400 labourers. It has been built by Larsen and Tourbo. The main sculptor behind it is Ram Vanji Sutar, a 93 year old sculptor, graduated from J.J school of Arts in Bombay. He is a Padma Bhushan Awardee and has sculpted masterpieces like Mother Chambal in Madhya Pradesh, statue of Maharaja Ranjit Singh in Amritsar and much more.


All its construction was started by making a trust called Sardar Vallabhbhai Patel Rashtriya Ekta Trust (SVPRET) which was set up by Narendra Modi in 2011. This trust was able to collect tonnes of iron from farmers across all states. Now the World’s Tallest Statue is in India.

The planner of the statue is Ram V Sutar who is a notable stone worker of India and furthermore Padma Bhushan awardee.


The statue was designed in such a way so that it could withstand wind velocity up to 60 m/s and earthquakes.


Time taken for constructing the statue is 42 months and 3,000 workers hard work and 300 engineers from L&T brought up such a great success.


The base of the statue is constructed by 129 tonnes of iron implements collected from the 100 million farmers in 169,000 villages all over India.


The total amount cost for the Statue of Unity is 3,000 crore.


The statue is built in three layer structures in which the inner layer is made of RCC (Reinforced Cement Concrete), the second layer is the steel structure, and the third layer is 8 mm of the bronze cladding.


The most essential and fascinating thing is the two lifts at the RCC layer. At a time one lift can carry 26 members. Now the World’s Tallest Statue is in India.


All Indians came together on 31st October 2018 to pay a tribute to The Icon of Unity Sardar Vallabhbhai Patel, as Indian Prime Minister Narendra Modi inaugurated the Statue of Unity on his 143rd birthday and celebrating his contribution towards helping India for achieving freedom.


The Statue of Unity project says-As a memorial to Sardar Vallabhbhai Patel, the statue will not only remind every individual of our great nation’s freedom struggle but will also inspire the people of our country. This will inspire young generation and inculcate Sardar Vallabhbhai Patel’s visionary ideologies of unity, patriotism, inclusive growth and good governance.


Sardar Vallabhbhai Patel is without a doubt the incredible figures of Indian nationhood and was urgent to the Indian autonomy development and political association of postcolonial India. He died just three years after Indian Independence.


At the point when the sub-mainland’s 584 regal states were given the decision of joining either Pakistan or India in 1947, it was Patel who persuaded a large number of them to join India. This was the reason why he became to be known as the Iron Man of India. The statue itself has been made of some 5,000 tonnes of iron.


Other Amazing Facts About ‘Statue of Unity


Statue is constructed at a cost of Rs. 3,000 crore, the height of the statue is 182-metres, ehich also includes the base of 25 metres.


The statue is built in less than five years, it is the world’s tallest, grandest and giant statue beating the Spring Temple Buddha in China which is currently the world’s biggest statue at 128 metres.


It has been built on the Sadhu Island in the state of Gujarat, 100 kilometers southeast of the city of Vadodara, with the waters of the Narmada river( Sardar Sarovar dam) surrounding it. The dam is considered to be one of the largest structures standing at a height of 42 metres. Its foundation stone was laid by Jawaharlal Nehru in 1961 and is approximately 200 km from Ahmedabad, Gujarat’s largest city.


It os built such that it can withstand wind velocity up to 60 metres a second, vibration and earthquake.


For welcoming the visitors, Gujarat government has not only built a 3-star hotel, shopping centre and a research centre in the Sardar Patel statue complex but has also built high-speed elevators that will take you to a height of about 400 feet where you can get panoramic view of the surroundings. About 200 people can stand at any given point of time on a platform close to the statue.


The Indian government estimates that the Statue of Unity will generate approximately 15,000 direct jobs for the local people every year.


This ‘Statue of Unity’ has been built in 42 months’ by 3,400 workers and 250 engineers worked together round-the-clock to make the dream project of PM Modi a reality.


This statue additionally advances the Hindu patriot perspective of Indian history and solidarity, all while advancing free venture and looking for outside speculation. Now the World’s Tallest Statue is in India.


Benefits to our nation


Being the tallest statue in the world would definitely attract a lot of visitors across the globe to our Country with an expectation to attract around 10,000 tourists on a daily basis.


This perfect work of art will likewise enhance the travel industry of Gujarat.


This will lead to creation of jobs for thousands of people.


Income generated from the visitor centres, entry tickets, museum, restaurant and other sources will result in a lot of money boosting the economic growth of our country, India.


How to book tickets


Entry ticket for adults are at Rs.120 per person and for children for age three to 15 years, it is Rs 60. The ticket includes entry to the ‘Valley of Flower’, memorial, museum and an audio-visual gallery and the Sardar Sarovar Dam.


Tickets to avail the bus services can cost you Rs 30 for adults and Re 1 for children. The Entry for children below the age of 3 Is free. A premium ticket which includes entry to the Sardar Patel memorial, museum and audio-visual gallery, observation deck, Valley of Flowers, Statue of Unity site and Sardar Sarovar dam costs 350/- per person.


The timings for visiting are 9am to 6pm on all days. You can look up to the website mentioned below.


How can one reach?


Tourists can reach the State of Unity by road, air or by the sea. Two state highways connect the statue to all the prominent cities of Gujarat. The airport and railhead in Vadodara are located at a distance of 90 km from the statue in Gujarat.


By Air: Vadodara is a major city in Gujarat and is well-connected to other major cities of the country. The Vadodara Airport is 90 km away from desired location and provides easy access to the statue. Cabs and public transport is easily available at the airport and will take you directly to the destination.


By Road: A 320-meter-long bridge connects Sadhu Bet, the island where the statue is located, to the mainland. You can reached by a road trip via NH48 which would be 430 km long from Mumbai or a train may be taken.


STATUTE OF UNITY AND OTHER STATUES AROUND THE WORLD :